British expats are scattered throughout the world and many have settled down in foreign countries to get married, raise families or to retire. However, as the saying goes, “you can take the Brit out of Britain, but you can’t take Britain out of the Brit”, and how true this is when it comes to British food!

In MyBritishPassport’s conversations with clients living overseas, the following are the foods that we’ve noticed that Brits miss the most:

This treat, usually enjoyed with copious amounts of butter is a British staple, enjoyed with a lovely cup of tea. Some prefer to add a little sweetness and include Jam, Syrup, or honey. Crumpets are thought to have been invented in the 17th century and since bread ovens were not yet invented, they were cooked on a griddle. This one tops the list of favorite British Food. 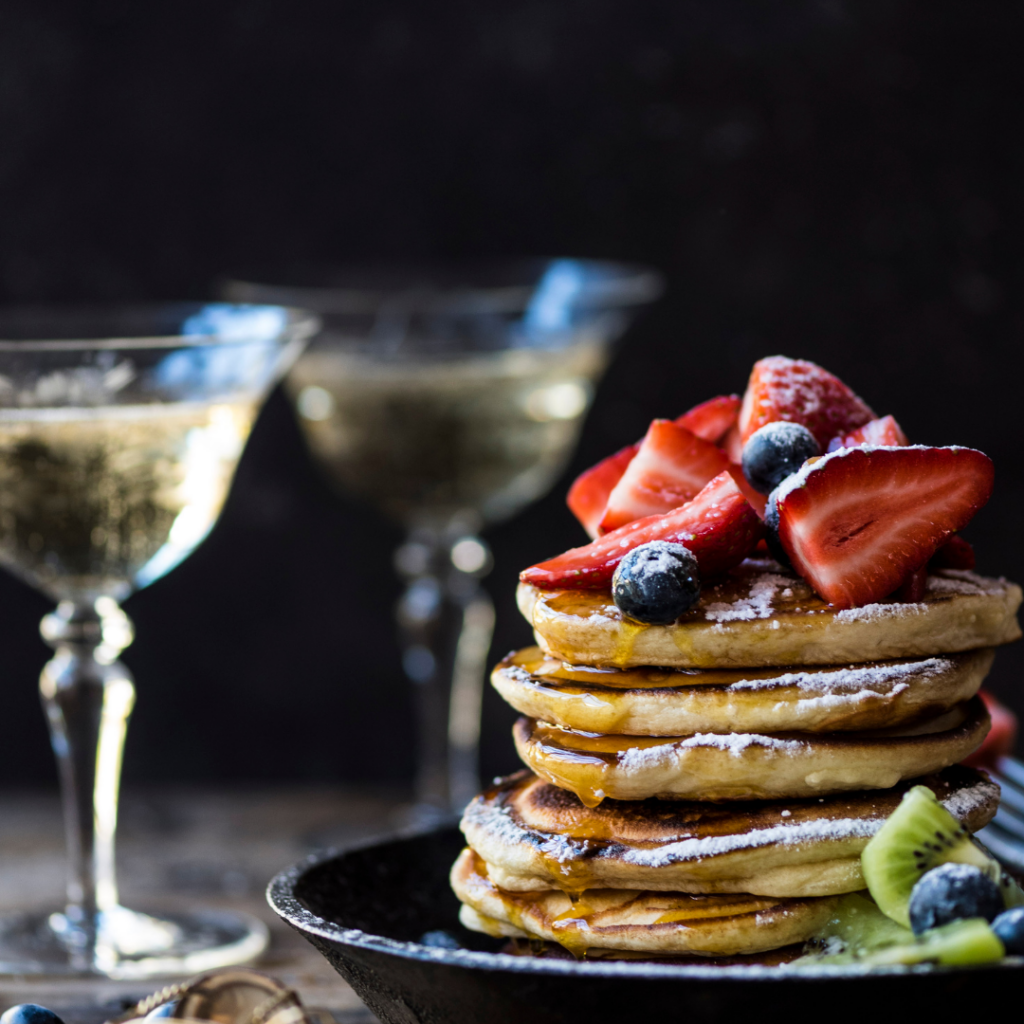 You don’t get more British than traditional fish and chips and a side order of mushy peas and a generous helping of malt vinegar!

Fish and chips eaten out of an old newspaper brings back memories of the British seaside during the summer with the wind howling and the rain gently coming down.

Of course, you can find fish and chips practically anywhere in the world, but the Brits have a unique way of making it taste extra special.

Baked beans are readily available in most countries (if not every country) of the world. But the distinct flavour of Heinz baked beans takes your right back to the breakfast table in the British countryside. Did you know that baked beans are sealed inside a tin before they are cooked, so when you open that tin, you are the first to see them in all their saucy splendour?

The smell of a Sunday roast is enough to get any tummy rumbling, but when it is the familiar smell of the roasts you enjoyed at home in England, it makes it so much more inviting. Brits abroad have expressed their longing for this unique and proudly British food brand.

This is a wheat-based savoury snack that is baked and not fried and is enjoyed at parties or gatherings. Often referred to as “knobbly sticks”, Twiglets have a marmite flavoured coating giving it a zesty and zingy taste. 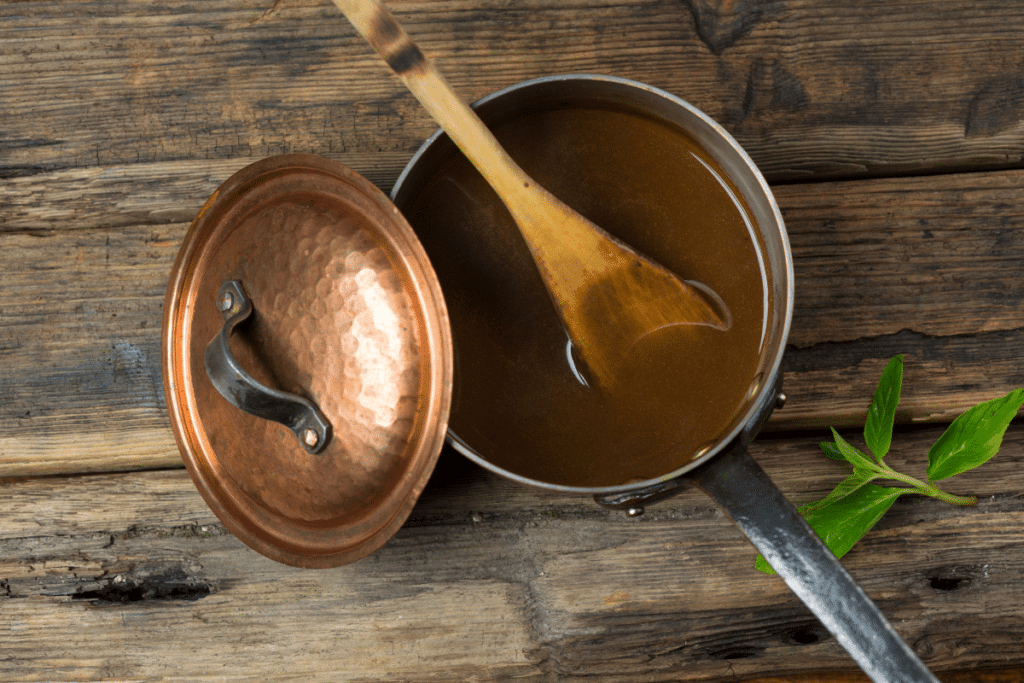 If you were brought up in the UK, you will no doubt have enjoyed a classic Sunday roast once a week, complete with roasted meat, vegetables, roast potatoes, Yorkshire puddings, and a generous slathering of gravy.

Other countries have their own versions of a roast dinner, but these are nothing like the British version, and most have never even heard of Yorkshire puddings.

Luckily, many Brits make their own Sunday roasts when living abroad but this may involve getting a good recipe for Yorkshire puddings from your mum! 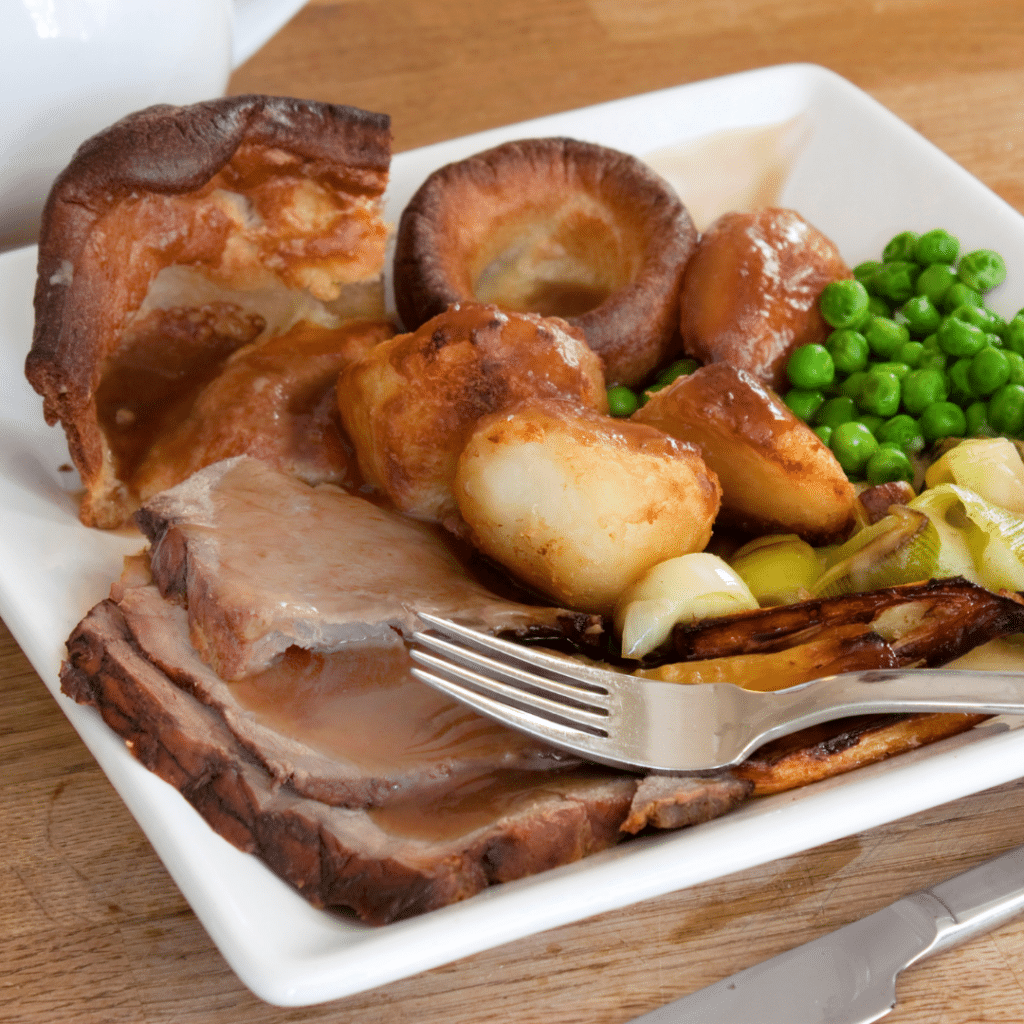 Described as a glossy thick soup, Heinz tomato soup is a pantry staple. Having celebrated one hundred years on UK store shelves without any changes to its physical packaging since its inception, Heinz Tomato soup has made its mark.

While some additions can turn this great soup into a winning starter at a dinner party, this is a proper tomato soup base that does not let its fans down. 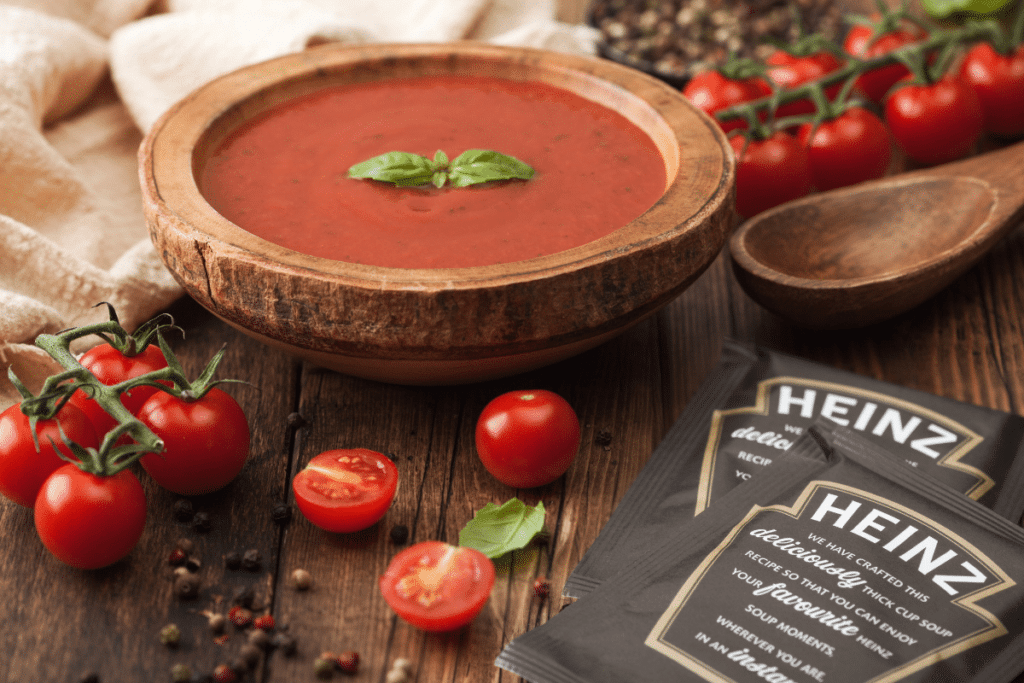 It is difficult to find anyone who doesn’t appreciate a good, old-fashioned British cream tea!

These are available throughout the UK, especially during the summer, at cafes, tea rooms and hotels.

Fresh scones, juicy strawberry jam, butter, and a dollop of clotted cream are best eaten with a refreshing cup of tea or two.

When you move out of the UK, you will notice that other countries do not do afternoon tea in the same way. Scones may be served with cream, but it will likely not be the Cornish clotted cream that is so popular back home. 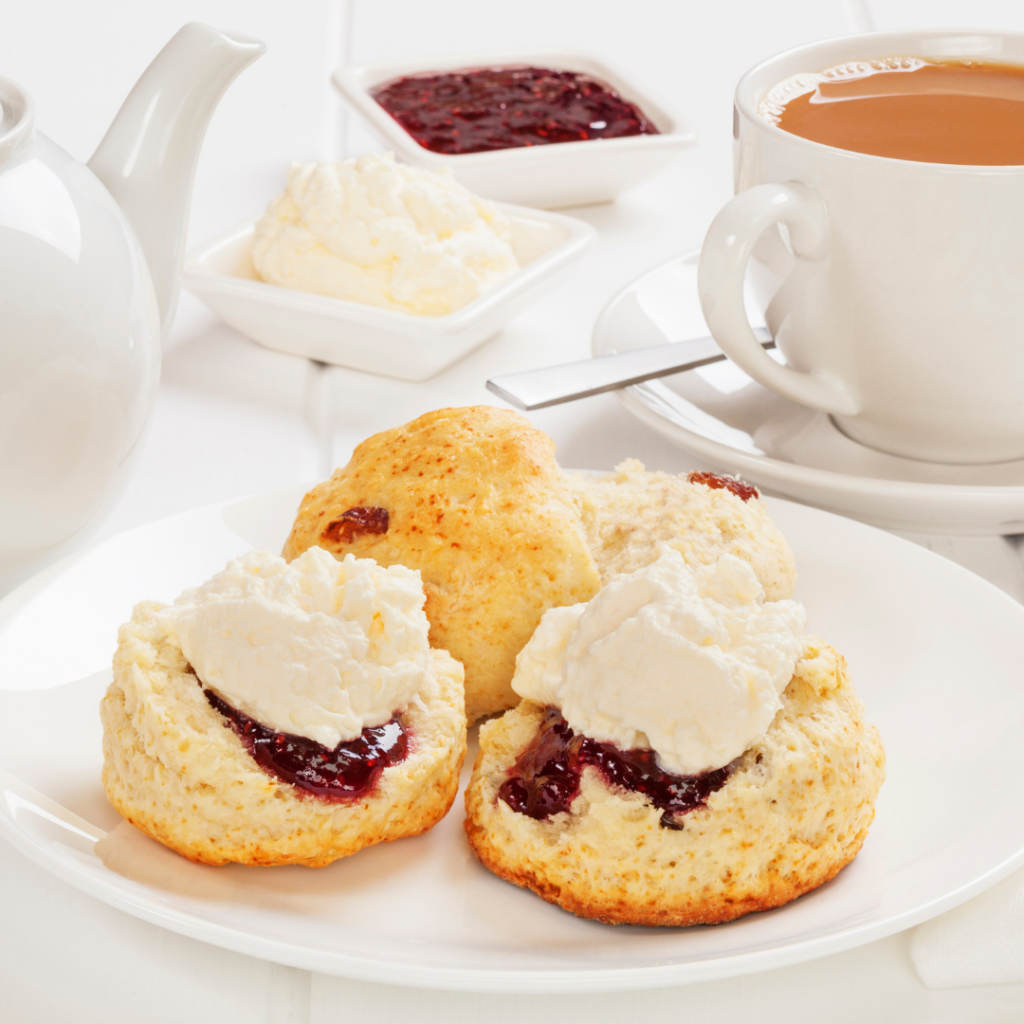 Whether your favorite pub food is a comforting fish pie, a contemporary Yorkshire pudding wrap, or a plain old burger and chips, nothing quite compares to how delicious British Food tastes!

If you are based abroad, one of the first things you’re likely to miss is a visit to your local pub for a pint and a tasty meal.

Although there are many British-themed pubs in foreign countries with a large UK expat presence, it is very difficult to emulate the atmosphere of a classic, British pub.

As you know, Brits are famous for drinking tea and dunking biscuits.

Move out of the UK, and you will find it difficult to get a good type of biscuit that is similar to the digestive biscuits back home.

This is disappointing because digestive biscuits have the perfect consistency for dunking in tea, which brings out their malty flavor.

Fortunately, there are many British expat shops abroad, and you should be able to pick up a pack or two of digestive biscuits from them.

MyBritishPassport specialises in British Passport renewals from abroad. Get in touch with us today.

Brian Aslett
08:34 18 Jan 22
In December I realised that my UK passport only had a few months to run. I looked on line for help and got in touch... with "My British Passport". Their service was exceptional. I completed the online application, paid and sent in a photo etc. Christa kept in touch with me regularly on progress and the new passport arrived by courier a few days ago. I could not have asked for better service.read more

Keith Hulse
17:30 24 Dec 21
I thought the whole process was handled very professionally and with great care - I would not have any hesitation in... recommending this service to anyone applying for a British passportread more

Sharon Belfante-Taylor
15:29 24 Dec 21
Shaun was exceptionally helpful and informative. Getting your British passport renewed while living in the USA can be a... daunting challenge, but MyBritishPassport really made things so easy. I highly recommend them. The cost is very reasonable when you consider just how much renewing your passport will be without them plus all the anxiety of making sure you did it right. They are well worth the price.read more

Kay Stoler
12:56 07 Dec 21
Using their service was effortless and amazing. Their consultant, Christa Devenish was fantastic - nothing was too much... trouble, and if I didn't understand anything - Christ went out of her way to assist me. The whole experience was fast & efficient.read more

joanne harvey
14:06 06 Dec 21
Extremely efficient and helpful. New passport received in 3 weeks. Shaun answered all my questions promptly and... patiently! Even refunded because I paid for my own express delivery. Couldn't be happier with the service. Fully recommend it for Brits living abroad.read more

Johan du Toit
17:12 22 Nov 21
Ive had the pleasure to have Carla handle my application at MyBristishPassport, she has been very professional and... efficient. I would highly recommend MBP to anyone looking for their passports to be renewed.read more

John Mathers
09:07 20 Oct 21
Being of the older generation, I found that dealing with My British Passport an absolute pleasure, all aspects of the... procedure of applying for new passports were handled very professionally and timeously,I have absolutely no trouble in recommending them to anyone.read more

Paul Davies
10:59 18 Aug 21
Very professional and helpful if I had issues. I definitely would use them again.Many Thanks